‘Let’s Play’ grows into an ultimate ecosystem, a stunned super-reality of inflated and condensed moments. Lyotard’s cryptic inhumanity and postmodern visions are here and kicking: In the Lyotardian vocabulary where ‘immaterial’ is linked to ‘immature’, the inhuman condition expands from a systemic, over-human external complexity to an internal, implicit nature embedded in us humans, our unteamable, invincible childhood; A literally nonage “that announces the Deep in human nature – which perhaps is not all that human, and not all that deep”α. ‘Let’s play’ reifies Lyotard’s lexical bipolar into ‘apparition’ and ‘apparatus’, coiling adventures which transpire through hybrid deterritorialized bodies.

A pipe-slided phantom playground which breeds seemingly self-sufficient, self-legitimated user resources who act within infinite rule sets, noncompulsory. Let’s Play’s eventual system doesn’t need master narratives or obliqued persuasion to cultivate, it is self-determined, as Anne Elizabeth Sejten points out for postmodernity: “The nature of its goal is self-ensured by the performative gearing of the system”β. Gamers in streaming platforms become the connoisseurs of the present, the charmers of strained action which occurs right here and right now, along collective networks of peer humans, bots and thingy -but not less interactive- backdrops.

The production and experience of the presence progress into artificial multimodal narratives where distinctions of reality and fiction are irreversibly undermined. Gumbrecht marks in his insightful essay on sports, arts and aesthetics what makes sports i.e. plays so compelling and analogous to arts: it’s a zoom in the original emerging of forms, capable of captivating the attention as we are challenged to recognize the modalities in which these forms eventuate. This creates tensions, resolutions and surprises, structuring attention in particular ways and becoming more and more compelling as the performance has the potential to enfold its observers. Thus an act observed from a distance can progress into a collective effervescence by experiencing “the logic of the distinctions drawn and the operations performed as one’s own”γ. Let’s Play builds real states of affectedness in intangible environments, occupied by potential infomorphed life-machine-thingy forms. 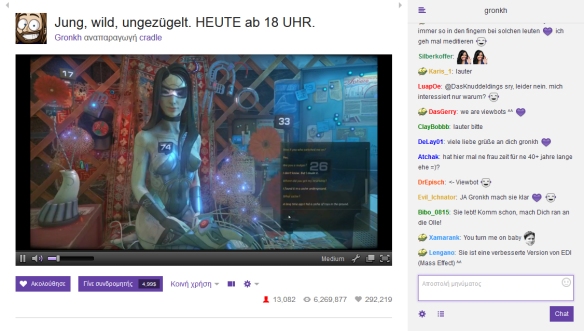 Chatting with a female android inside ‘Alderyn’s Cradle’, an open world fantasy role-playing video game that follows an exiled traveler caught at the center of a monumental struggle between humanity, nature, and the gods. It features strategic first-person melee-combat. 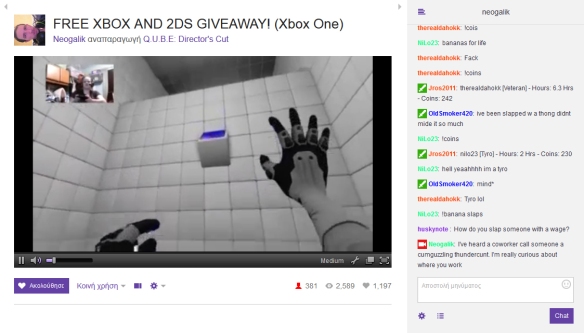 Inside the sterile environment of Q.U.B.E. (Quick Understanding of Block Extrusion) A physics-based puzzle video game is an expansion of a student project. Here in the “director’s cut” version of the game, featuring more story-based elements.

“Everything is to be done. All the adventures are still here”. The contingency of configurations and sequences is imminent in narrative time. Paul Ricoeur in his seminal treatise on the narrative function brings out the meta-temporalities of fictional trips. Narrative time breaks from linear, unidirectional modes to iterative ones, especially at the level of ‘being with others’. Collective narrativity has an additional relation to historical time: “it’s the external public time, or we might say, the time of the public”δ. Streamed plays which unfold in virtual worlds become super-symbolic systems, self-referential and profound, a redoubling of reality that can and is organizing afresh the world, creating new networks for rendering experience and its output.

A reality remade from fictional scratches which draws massive numbers of acting resources, where the poetics of hybrid forms and deterritorialized realtimes move towards universality. Ricoeur’s closing lines enclose the potency in a poetics of the unreal: “with opening up the horizon of the differential, history brings us forward to what is possible, while fiction, opening before us the horizon of the unreal, leads us to what is essential”ε.